Yesterday, SourceFed alleged that Google was manipulating autosuggest data to protect Hillary Clinton. The thrust of the allegation is that when you search for "hillary clinton cri" crimes does not populate as a possible autosuggest. Here's the video for more on the allegation:

This is a serious allegation against Google, so we looked into it and turns out that SourceFed missed an important check before suggesting Google manipulated autosuggest to protect Hillary Clinton and her campaign... Does 'cri' ever autosuggest to crimes, criminal, or something similar. Turns out, it doesn't.

First, let's check Donald Trump who has also been involved in criminal and civil cases. 'donald trump cri' doesn't return anything about alleged crimes that he may have committed.

Here's where it gets even more convincing. What about people who are known as criminals? Here are the autosuggest results that we're getting for these notorious criminals:

To support their allegation, SourceFed used Google Trends to verify that crimes was far more common that what Google suggested to complete the query, but the same disparity holds for Al Capone (see below) and the others for that matter. 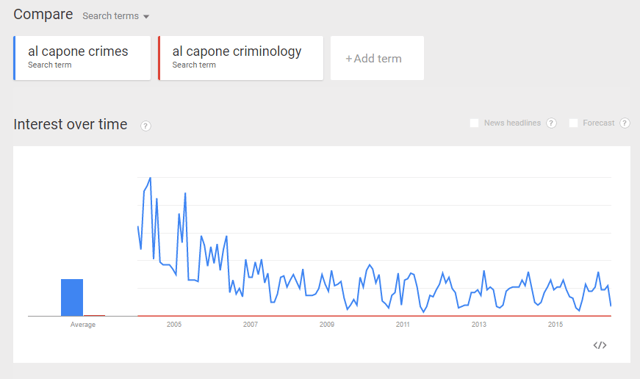 Unless SourceFed wants to expand their allegation that Google is trying to whitewash over the crimes of Al Capone, Charles Manson, and Tedy Bundy just the same as they allege for Hillary Clinton, they should retract their allegation. Ultimately, this is Google's fault but it's because of a flaw in how autosuggest responds to the characters, cri, not any intentional manipulation to benefit Hillary Clinton.

There are no related posts

Nobody wants to see their marketing budget go to waste. But you’re also on the...
END_OF_DOCUMENT_TOKEN_TO_BE_REPLACED

Marketers do a lot. In addition to growing our clients’ businesses, we also...
END_OF_DOCUMENT_TOKEN_TO_BE_REPLACED

The paid advertising landscape is always changing especially for the addiction...
END_OF_DOCUMENT_TOKEN_TO_BE_REPLACED